Aikido literally translated means "way of harmony". It is a complete and unique style of self-defense founded in 1942 by O-Sensei (Founder) Morihei Ueshiba. It is non-competitive and non-combative and is essentially based on the principle of harmony and non-resistance to one's opponent.

More than just martial arts, Aikido has also been described as an art of assimilation and unification according to the way of chivalrous spiritual harmony where one's action is trained to function in perfect union and harmony with the spirit of the universe.

There are many styles of Aikido. The Aikikai Hombu Dojo style, the Yoshinkan Aikido, the Yoseikan, the Tomiki, the Ki-Society etc all originated from the teachings of O-Sensei, whose style and teachings are today inherited by the Hombu Dojo and taught around the world in affiliated Aikido Dojos including in Malaysia. 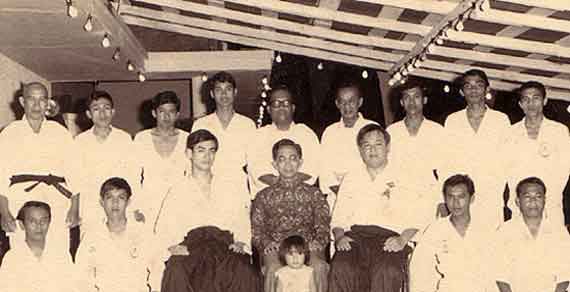 The first ever Aikido exhibition in Kuching in 1971.  The late Mr. M.K.Lee, a pioneer of Singapore Aikido flew in and showed strong support to young Yamada Shihan and Aikido in Malaysia. 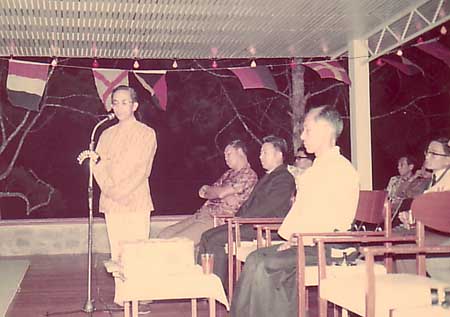 Shihan Jun Yamada arrived in Kuching and right after his arrival a dojo was set at
the Chief Minister's residence in November 1971. It was the first dojo of Malaysia Aikikai.

Soon after Academy Aikido Jyuku was established by J.Yamada Shihan, he was visited by Kisshomaru Doshu and a strong team of senior instructors from Hombu in a show of support - (following picture from left ) Sensei K. Miyamori, M. Fujita , Y. Odera, Doshu, H. Somemiya, S. Endo and J. Yamada.
The delegation also successfully made a first ever Aikido demonstration in Kuching, Malaysia in August 1972 with the cooperation of the state government. 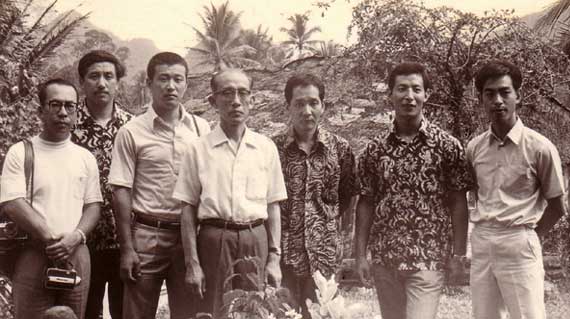 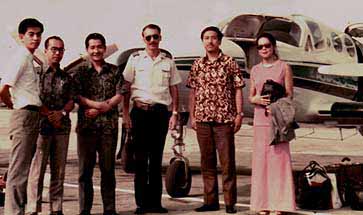 Helicopter arrangement made by the Sarawak Government brought Doshu Kisshomaru
and the delegation to Kuching when they missed their Malaysia-Singapore Airliner.

In June 1973, the then Chief Minister of Sarawak, Tun Rahman Yakub accompanied by the Federal Secretary, Encik Wan Sedek and J. Yamada Shihan made a courtesy call on Kisshomaru Doshu at Hombu Dojo in Wakamatsu-cho, Tokyo to thank them for their support and encouragement and for the propagation of Aikido in Malaysia. 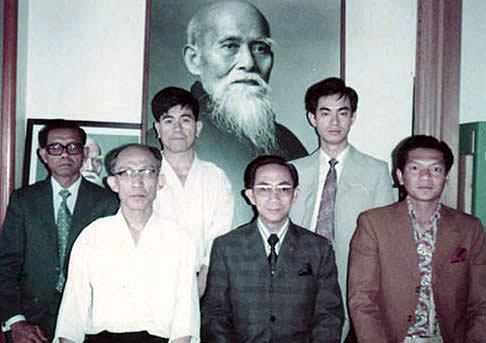 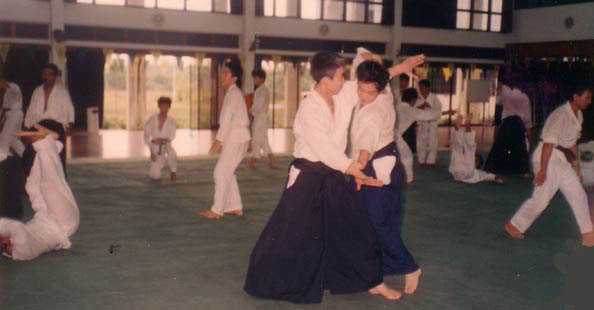 The 30th Anniversary began with Doshu's seminar at HIKMAH Multipurpose Hall in Kuching, then at the International University Malaysia, Police Training Centre (PULAPOL) in Kuala Lumpur and Penang from 21st to 25th of September 2001. 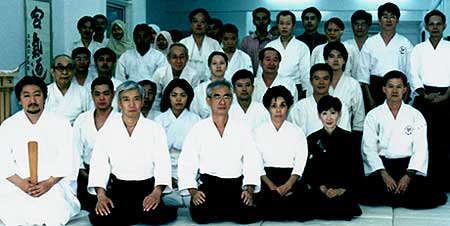 It was an honour for Yamada J. Shihan to be in Malaysia under the recognition and support from the Japanese Embassy, The Japan Foundation and Aikido World Headquarters(Hombu Dojo). 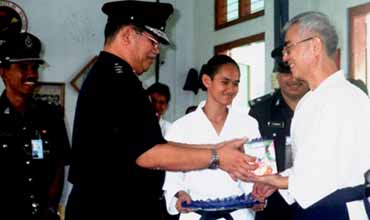 Interest of The Malaysian Royal Police (PURPOL) for Aikido was tremendous and studies and searches for a suitable qualified individual as their Aikido instructor took place in the recent years.

After taking steps in their search the Malaysian Royal Police asked Yamada Jun Shihan to teach Aikido at their training centre in Kuala Lumpur.

This very first Aikido training at the Malaysian Royal Police, Police Training Centre (PULAPOL) in Kuala Lumpur was scheduled as a full day training course event which continued for a month.

The AIKIDO practice at the police-training centre (PURPOL) began in May 2002.  Participants were beginners in Aikido, nevertheless they were all experts in other martial arts.